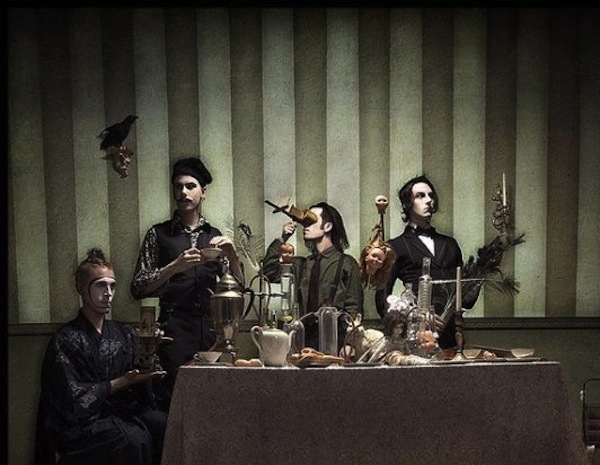 “The California-based Cinema Strange Project made headlines around the world when they completed a 1/20th scale model of Big Ben using toothpicks, fly legs, and fingernail clippings. The unpredictable ensemble commented, “We’ve played music in Europe a bunch of times, we’ve made films about zombies and dancing military men, and we made our last album like a story book. The Big Ben model was a logical next step.”

The band is infamous in the North American gothic scene for their unique and theatrical stage shows, sometimes involving up to a dozen or more actors and performance artists. Their music, while originating humbly in 1994 as a high-tempo gothic post-punk expression, has evolved into a bizarre and exciting species of musical storytelling, breaking new ground and taking over where bands like the Virgin Prunes left off.

After two self-released records and two albums with the German label, Trisol, they have left an unidentifiable but very real mark on the world gothic scene, and it’s anyone’s guess what they’ll do, or where they’ll be, or who they’ll claim to be next.”

On January 18th 2008 Trisol will release the 2nd album from The Deadfly Ensemble[1]. On “A seed catalog for extinct annuals” the solo project of Cinema Strange founding member Lucas Lanthier creates what they call “a whole new theater of art-rock possibilities somewhere between Current 93 and the legendary Virgin Prunes.”