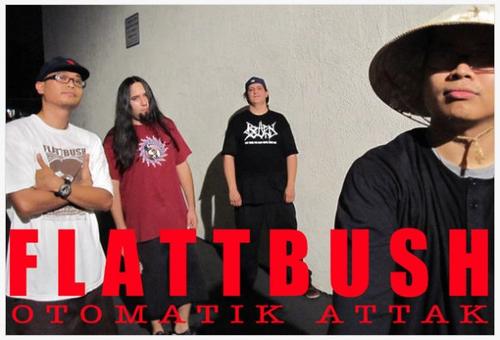 Flattbush is a heavy metal band from Bellflower, California, a small city within South Central Los Angeles county. The group was established in early 1993 by Enrico Maniago (vocals), Brian Legaspi (lead guitar), Eric Long (rhythm guitar), Arman Maniago (bass guitar), and Anthony Gonzales (drums). Brian Legaspi exited the group in 1994, the band then became a quartet. Flattbush performed numerous high school and college concerts before entering into the Southern California and Orange County, California bar and club circuit. In 1998, Flattbush made a name for themselves by opening for Melt Banana of Japan. In 1999, Drummer Anthony Gonzales resigned and was replaced by Ramon Banda. Founding member of Faith No More, Billy Gould, signed the band onto his label,Koolarrow Records, in 2001. Flattbush opened a show for Napalm Death of Birmingham, England in 2002.

In 2002, guitarist Eric Long resigned and was then replaced by guitarist Bradley Walther. Flattbush recorded their Koolarrow Records debut, Smash The Octopus, produced by Bill Gould that same year and released in 2003. Following Flattbushs’ first tour of the United States in 2003, Ramon Banda resigned and was replaced by drummer Joe Luevano before their second headlining tour of the United States in 2004 and again in 2005. Flattbush maintains a legacy for being one of the most underground and wildest acts in Grindcore.

After releasing their first album Smash the Octopus in the Fall of 2003, Flattbush embarked on two U.S. tours including opening slots with Mike Patton and Rahzel, a west coast tour in 2004 with Fear Factory.[citation needed] Over the next two years, the band played with Asesino, Brujeria, and completed two successful American tours.[citation needed]

Flattbush’s second album Seize the Time was released on September 9, 2006, produced once again by Billy Gould. The band plans to tour the U.S. and abroad.

Flattbush’s lyrical content had mainly focused on Anti-imperialism, exploring politics and current events since 1996. In addition, Flattbush has openly espoused Marxism and Leftist ideals, and glorifying the People’s Movement in their website, lyrics, liner notes, and imagery since 2001.